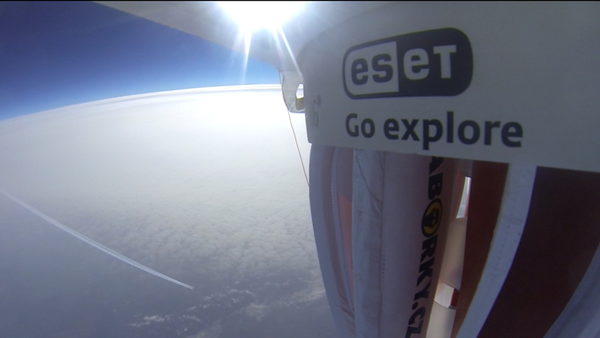 Prague, Czech Republic - ESET®, the global leader in proactive digital protection with a record 10 years of consecutive VB100 awards for its ESET NOD32® technology, has launched (together with its partners) a gondola called Dropion into the stratosphere. For this unique social gaming experiment dubbed Stratocaching, ESET partnered with a group of young technology enthusiasts from Czech “No Rocket Science” and Technet.cz.

In all, more than 200-thousand online viewers and 13-thousand players watched in real-time as the Dropion soared to the stratosphere, releasing a dozen GPS-tracked seeds and landing safely in a village 50 kilometers from Prague, Czech Republic. Thousands of people searched for these seeds from near-space with the help of their smartphones in this world premiere of Stratocaching - a geocaching game with a space twist, as reported by Technet.cz, a respected and most visited Czech technology news portal.

“Exploring is an activity that enriches every individual. It allows us to create, relax and get inspired by new ideas. ESET was proud to be the main partner of the Stratocaching experiment and our team has great respect for the talent and enthusiasm of its organizers. We all enjoyed the moments as ESET Go Explore Dropion touched the stratosphere,” says Jaroslav Fabian, Marketing Director of ESET Czech Republic, a subsidiary of ESET.

Stratocaching was the first of its kind gaming experiment in the world, launched in a country where geocaching is quite popular (Czech Republic ranks 4th globally based on Geocaching.com). The project was 16 months in the making and involved scientists, academicians, professionals, companies as well as enthusiasts who took part in the pre-launch preparations. Technet.cz highlighted the success of this gaming experiment with elements of science as follows: “This experiment also introduced some aspects of near-space physics, meteorology and technology, and for the enthused fans put space literally within grasp.”

In addition, Lupa.cz, a Czech news portal, has honored the Stratocaching project and its main partner ESET, as the best Internet Project in Czech Republic. It received the Crystal Magnifying Glass 2013 Award in its annual Special Award Category.

ESET®, the pioneer of proactive protection and the maker of the award-winning ESET NOD32® technology, is a global provider of security solutions for businesses and consumers. For over 26 years, the Company continues to lead the industry in proactive threat detection. By obtaining the 80th VB100 award in June 2013, ESET NOD32 technology holds the record number of Virus Bulletin "VB100” Awards, and has never missed a single “In-the-Wild” worm or virus since the inception of testing in 1998. In addition, ESET NOD32 technology holds the longest consecutive string of the VB100 awards of any AV vendor. ESET has also received a number of accolades from AV-Comparatives, AV-TEST and other testing organizations and reviews. ESET NOD32® Antivirus, ESET Smart Security®, ESET Cyber Security® (solution for Mac), ESET® Mobile Security and IT Security for Business are trusted by millions of global users and are among the most recommended security solutions in the world.